The Necessity for Gyms to Provide Showers

So you are opening up your own fitness center. Congratulations! I am sure your head is spinning with how to implement your business plan and to start your build out. On top of everything else, you also start thinking about all the necessities that you believe your members will want and that will set your fitness business apart from the rest of the overwhelming competition out there. Finding your niche is the hard part, but that is not what this particular post is about. Sorry 🙁  However, what I want to help with is the consideration of a disguised accessory that is a necessity.

The masked necessity I am alluding to is the shower. As a current gym owner who has experience with consulting and mentoring other gym entrepreneurs, I cannot count how many times I have been asked the following questions:
Should my gym have a shower?
Should I spend the money now and build out a shower?
Or should I wait to see if my members want showers in the future and build it out later?
Does having a shower really even affect the bottom line, retention?

Well, if you are unsure of the answer to any of these questions, now is the time to find out more about it from another gym owner’s perspective.

Should My Gym Have a Shower? 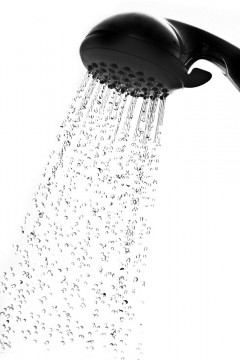 We all know what showers are and the purpose of them. Conceptually, one uses a shower to get clean after getting dirty. Hopefully, everyone that will be using your fitness facility will be getting dirty because of the sweat that usually accompanies a good solid workout. Most likely everyone that has broken a sweat in a public place will want to shower. Some prefer to do in the comfort of their own abode and others will prefer to do so immediately at the facility. Even if the majority of your gym members do not fall into the latter category, those that prefer to shower at home may run into a situation where they do not have a choice but to shower at the gym.

Think about it, people have a tendency to play on their own unknowns. Even if they have never ever used a public shower before, they will wonder if they will ever need it. Given a choice, they will take the known ( a gym with a shower) over the unknown (never actually using a public shower but what if…I need to.).

Take for example the wireless phone plan. Even though year after year I have never used more than 700 minutes, I am terrified of going over and paying that outrageous cost per extra minute. So what do I do? I am extreme and go for the unlimited plan, but most people would go for the very next plan up because of the dreaded “what if” thought that consistently pops into their minds. It secures peoples minds to pay an extra $20 a month for that plan with more minutes and rest assured that in case of an emergency that the extra cushion is there.  Although that extra $20 will add up over the 2 year contract to way more than that one time emergency call is going to be.

Where am I going with all this?

The answer to “should my gym have a shower?” is YES!

Now that you know that you should have a shower, when should you build one? Of course the answer to this is strictly based on your own business’ budget constraints. However, I would do everything in my power to budget for, at the very least, one shower right off the bat ~ especially if you are building out a shell. I have gone through numerous constructions of my own facilities (they were all shells) at the very least one shower was a must for me during the first build out phase. If you are currently working with a shell, it will behoove you to place the shower in immediately. If you decide to budget for a bigger and more elaborate project later or want to see if it is a feature that your members will prominently request, restructuring the plumbing later can be a big pain and really expensive after the build out is complete.

So here is the answer to the next 2 questions:
Should I spend the money now and build out a shower? YES, but gym showers do not have to be huge and elaborate, just functional.

Or should I wait to see if my members want showers in the future and build it out later? NO.  Not if you can help it. It could cost you comparatively, a significant amount later, and not just for the re-construction but also for the loss of potential customers that consider showers at the gym a requirement and retention factor.

Let’s face it, large-scaled gyms and the majority the smaller prominent fitness chains have showers and may include other features such as stem and sauna rooms. The big gym chains have large spaces allocated for shower and spa facilities, and the investment is also big when it comes those types of gyms providing state-of-the-art facilities.

While large chains provide such facilities, smaller gyms and fitness studios might find it difficult to compete with them in this aspect. Having a large shower facility does not necessarily mean that it will be the deciding factor for a member to choose that competitor over yours. Similarly, a small fitness studio having just one shower could not hurt. Having said that, a shower which is unusably small and lacks the basics of cleanliness may hamper your business profits and set you up for a lawsuit.

By just having the ability to say that your facility has a shower, this will enable you to stay afloat next to your competitors. When talking about advantages and disadvantages of a shower in a small gym or a fitness studio, one should not forget the fact that irrespective of the shower’s size, providing access to one will do no harm to your overall bottom line.When a prospective member inquires about the gym or if the gym is planning to come up with promotional material for marketing purposes, the mention of shower facilities can be an important factor.

Does having a shower really even affect the bottom line, retention? YES. Although I cannot back my answer up with a study on this particular question or provide you with statistics (I could not find any),  I can at least back up my answer with simple logic.  If you if you provide your members access to a shower, you will never have to ask yourself the question “what if…?”.

In your opinion, is at least one shower necessary at a fitness facility?

Although many gyms have showers, the convenience or comfort of taking one is not always possible. An alternative to showering (or supplement) is to use ShowerPill athletic body wipes. Antibacterial wipes for the body that not only cleanse the skin but also moisturizes it with vitamin E and aloe vera. Stay Fresh!!!!!!
ShowerPill Prez…

I’m a member of a gym and we have been experiencing problems with shawers not working and nothing was done. I want to find out if is a must for gyms to have shawers. And if yes what standard is used and what are the requirements regarding water? We have a gym with a pool and is maintained regularly but shawers have no water. I drive 12 km to gym to work out have a shawer and go to work. But there is no water and we paying R300 per month. Is it fare to R300 for gym with out sbwering water.

I can only speak to showers in the US. Every state and municipality has it’s own rules regarding shower facilities. However, to the best of my understanding all fitness centers with showers are subject to local health department inspections.

Hi, would you know if there’s an approximative estimate in the fitness business as regards how many showers per member? I work as a procet manager in Europe and have very recently included a new and sensational, very ecological shower concept in my portfolio of servies and products and I am facing on project now – a high-end sports club (tennis, fitness and lawn hockey) – they currently have +- 50 showers for about 3.000 members and need to renovate the shower rooms incl. changing the showers, a shower density that I find quite high!! On the other hand I have another recent client (fitness club with pool), also with about 3.000 members and they have a total of about 20 showers, i.e. a third of the other one. Hope to get your comments on this. Best regards / Per

I will prefer to take a shower in my private shower room just after the Gym.

Absolutely yes showers and make Sure the water is decently hot not luke warm.. I would never pay for a gym with no shower I go to work after the gym.. ✌