AR Augments Your Fitness Center For A New Reality

I recently wrote a post about virtual reality and mentioned Augmented Reality, which extends VR into the real world. When you superimpose digital images onto the real world with AR software that makes them interact with your physical space.

So, all of this talk about things likes VR and AR in the gym sound like science fiction, but they are coming at us fast. We still don’t know how things will play out, but the technology is largely in place it just remains for entrepreneurs and consumers to figure out what works and what they want. 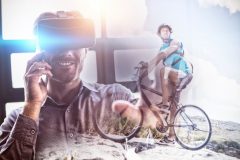 Augmented Reality is like VR, but you can keep track of your surroundings. VR draws you into its world and AR enters yours. Virtual reality devices are mostly headsets that users strap onto their heads. The motion sensors in the devices sense your orientation look to give a realistic sense of being inside a virtual reality.

Augmented Reality has a more challenging task. AR headsets have to composite digital images into real-world scenes. You can use tablets and smartphones, the camera on the device and the motion sensors factor the digital content into your view on the screen. If you use a headset, it will have to allow an external view or capture it with cameras.

Virtually Cloning Yourself To Be A Better Gym Manager

Well, what can you do with AR that is so much better than just being at the gym the old fashioned way? First, you can be there when you are not there. You can record standardized demonstrations and orientations. As these would allow members to call them up when you don’t have time to do it personally.

If you can make a two-way connection, you can train remotely and give valuable feedback to your client and demonstrate form and correct their form. Augmented reality takes the boundaries away, so you can multiply yourself and be anywhere. You shouldn’t underestimate the value of seeing how well your customer performs exercises. You can help to prevent injuries.

There is always the entertainment and gamification value of adding digital elements to your workout space. Pokémon Go only scratches the surface of the possible. The game superimposes images on the map and your smartphone screen. However, it doesn’t yet take terrain and obstacles into account. For example, you can view a Pokémon at a distance but it will not hide behind any objects such as furniture.

Equipment is a significant element in how AR emerges in the next few months and years. Will you have to supply it for your clients, at least initially? Will new headsets appear quickly and everyone just brings their own? There are many more details that need to sort themselves out before AR becomes a real value-add for gym businesses.

Gyms are not the only retail operations that will benefit from AR. If stores begin to use AR on the showroom floor, this may knock on to becoming part of merchandising in the gym. Snapchat.com recently made a big production of selling its stylish sunglasses headsets in strategically located vending machines. Vending machines can interact with AR and also trade merchandise for digital publicity. The use cases for AR are limited only by the imagination of entrepreneurs and software developers.

Some Of The Many Use Cases For AR

The following list shows some of the things you can do with AR that were not possible before. It’s not a definitive catalog because the technology is evolving fast and developers are inventing new use cases all the time. Source: uploadvr.com

Wearing a headset in the gym doesn’t sound very practical. If somebody comes up with a streamlined headset that is comfortable and functional, it will most likely also have forward facing cameras on it; this is a tricky issue for gyms. A couple of years ago, Google caused an uproar with its experimental Google Glass AR headset. People who encountered wearers felt uncomfortable and defensive.

The upset provoked by Google Glass is likely to repeat with future AR headsets in gyms; Snapchat’s glasses are just the beginning. There will have to be a new etiquette associated with how you use such devices, perhaps even leaving them at the desk when you head for the locker room. We do live in interesting times.