Because my gym has been doing well recently, I’ve been forced to analyze all my financials. I say this because I had been solely relying on the competence of my bookkeepers for the past couple of years, blindly thinking that they would do a good job. I was so wrong!

The past few weeks, I have been scrambling to brush up on basic accounting principals in order to answer basic questions that are not clearly defined by the books. That means I am completely redoing everything that the bookkeeper did (or in my opinion, did not do). 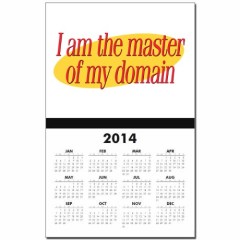 You might not look to Jerry Seinfeld for wisdom. That is, if you didn’t first stop to think that he has been so completely successful as a stand up comedian and the star of his own TV show. It’s true that the hook for the show was that it was about nothing but it was a great show. That is in no small part because of the work that Seinfeld put into building his career and the long and determined path that he traveled to get there.

His secret to success is both inspiring and mundane. It is a practical habit that is entirely within the mindset that you want to cultivate in a fitness center or studio:

According to Seinfeld, the key is to get a big year-at-a-glance wall calendar and cross out everyday that you complete your task with a big red felt marker. Once you build a chain of red marks you’ll start to get a sense of gratification from just marking off the days continuously. You won’t want to miss a day because you want to keep the chain on the calendar growing uninterrupted. You may have noticed that this worked very well for Seinfeld. Now he only does the work that he wants to do.

A Habit About (Almost) Nothing

It is simple but powerful advice! The article about the Seinfeld Strategy on the Life Hacker Website is well worth the read. The key to it of course is repetition. Any one who’s ever been halfway serious about training knows that you have to keep at it consistently to win ultimate success. The fact that someone as successful as Seinfeld refers back to such a simple concept underlines the power of the method.

Now let me tell you how this relates to my point. I learned from my mistake the hard way but I learned it quickly. The lesson was that if I had been paying attention, the books would not have gotten so out of control. From that point, I committed myself to go over the financials of both the gym and the software business on a daily basis, for five minutes per day.

However, this meant that I had to get in a habit of squeezing in yet another task to my already hectic day. I used the Seinfeld’s strategy, which I had read about some time ago. I bought a calendar, I am two weeks into the chain as I write this and it has not been broken. It is something so simple that could have saved me from things getting so out of control.

I have a short checklist that I use to go through and mark off each task that I have to do. Once the whole list is completed I mark off a day on my calendar. This only takes me about five minutes per day but the tasks are vital to the success of the business.

The idea of doing the things you need to master and stay on top of is a simple secret. Crossing every day off the calendar is a rewarding practice. It’s really great for running a business, writing or even for working out. It’s also a powerful tool to cross off the days on the calendar. That becomes a rewarding exercise in itself day-to-day, which will lead to the big rewards over the long haul.