The UFC has made a name for itself in the field of mixed martial arts (MMA). They have taken that success and ambitiously turned it into a familiar label onto a new big-box gym franchising operation that puts a body lock on their opponents. They are stable-mates with some of the big national brands but with the ability to leverage an entire menu of unique merchandising. Still, the question remains: What are the chances of this athletic-entertainment powerhouse muscling in on the gym arena? It turns out that its customers and employees have something to say about that.

A Short History of UFC Gyms 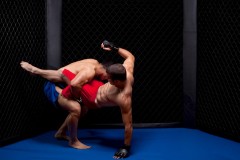 UFC Gym was founded in 2010 at their first location in Concorde, California. UFC worked with fitness industry equity partners New Evolution Fitness Company (NeV), among others, to develop the brand. It quickly grew to seven locations. Once the model proved to be successful the owners then acquired all of LA Boxing’s locations and are now expanding the model as a franchising opportunity with a turnkey operation. The brand takes care of everything; the local franchisee comes up with an initial investment in return for a split of the profits.

This branded gym chain is closely related to Crunch Fitness, as NeV have a share in both and did much of the design and marketing work. Additionally the founders brought in the former CEO of 24 Hour Fitness to get the venture off the ground. That gives it a cultural background that is right in the big-box sector of the market. These connections have contributed to the price point, which is in the same sort of region as Crunch and 24 Hour Fitness. The differentiating point is that it’s a cheap and cheerful big-box franchise, with mixed martial arts as a training option and theme.

The first thing you notice when you step into your local UFC Gym is that you are in a clean, fully equipped and heavily branded gym. You will also notice that at any given time there is a lot going on around you. UFC Gyms do have all of the standard equipment of a good quality gym and the classes are intense. You definitely know you are in a fighting gym with a strong focus on customer experience.

Like Crunch Fitness, UFC Gym franchises are focused on getting you fit as part of a dynamic, varied workout routine. They provide the creative class combinations that help members keep interested and support them with the leadership and motivational buzz that only true believers can bring to a session. The friendly enthusiasm of the staff sets the tone. The brand is on everything in such a way that UFC merchandise is a natural extension and there are diverse and appealing fitness and MMA products, that must do wonders for its profit margin.

Customers just love the service and the environment, if the Yelp reviews are to be believed. For my local region, Las Vegas, reviewing members seem to be particularly happy. Aspects that get raves are classes, the attitudes of the trainers and of course, cleanliness.

Employees Have Opinions Too

Reviews on the Glass Door Website show that UFC Gym employees speak highly of the senior management. Employees of other gym chains complain of favoritism, low pay and management apathy. UFC Gym employee reviews are more positive. Of course, the chain is new but since they have absorbed the LA Boxing chain that was over twelve times as large, and still have high marks, it implies a culture that is strong and well formed.

Strategy And The Hopes And Dreams Of Members Drive Success

Research and intelligence about the competition is a crucial part of business success. You must know what the other owners are doing. I have tried to make this an unbiased look into a company that will likely be turning up in your local market soon, if they have not done so already.

UFC is a proven brand name, with extensive industry knowledge, and an offering of the sort of classes that capture the imagination and inspire members. It is a fine recipe for gym management success. I recommend that we all keep an eye on UFC Gyms, to see if they regress to the mean of big-box mediocrity, or if they continue to inspire enthusiastic support.

This is a vital topic ‘Fitness Firm Case Study: UFC Gyms | gym insight blog’. Diamonds and UFC Gym give us a blinding glimpse of the innovations that are coming our way—and that they are helping to create.