This is part 1 of a multiple part series.

We have recently seen an immense increase in profitability of the fitness industry. This also means that there is an attractive prospect in terms of jobs and businesses in the industry. The U.S. Bureau of Labor Statistics suggests that the number of jobs within this industry is expected to increase by more than 23% over the next 10 years.[i] The bureau also said that the number of jobs available under “fitness and recreational sports centers” even went up to 484,200 in 2010.[ii]

Economists justify this prediction by looking at how businesses and corporations are offering health club memberships to their employees as incentives.[iii]  Besides this, baby boomers are being encouraged to exercise regularly, so that they can stay healthy and fight the effects of aging.[iv]  Let’s look at the current situation of fitness centers and jobs in the fitness industry:

According to the annual surveys conducted by the International Health, Racquet, and Sportsclub Association (IHRSA), there has been a significant increase in the number of health clubs, gyms, and other fitness centers.[v]  From the list found in the Yellow Pages, there are 30,500 fitness centers in the US as of January 2012.[vi]  Back in 2005, this number was just around 26,830 and gradually increased over the years.[vii] 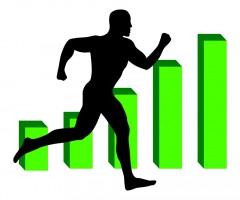 The number of people deciding to join a fitness center has also risen to a significant amount. According to the IHRSA statistics, the number of health club or gym memberships has increased from 41.3 million in 2005 to 50.2 million in 2012.[viii] The most current reports show number of people who have at least used a health club in 2012 increased those with memberships by 8 million in the same year.[ix]  This means that as of January 2013, there are approximately 58.5 million Americans who are utilizing fitness center via membership or other type of status. [x]

With these statistics, it might be safe to say that there are attractive prospects for jobs in the fitness industry. The number of personal trainers has also risen incredibly over the past few years. According to the Labor Department, there were 231,500 personal trainers in America as of 2011.[xi]  This is a 44% increase in the numbers from 2001.[xii]  That’s why you find so many people who are trying to turn their passion for fitness into a successful career.

Economists from the Bureau of Labor Statistics suggest that occupations like fitness instructors and personal trainers are the driving force in the success of the fitness industry.[xiii]  According to their calculations, the number of people in these occupations is expected to increase by 31.7% by 2020.[xiv]

The Physical Activity Council Topline Report revealed that over 60% of Americans regularly participate in fitness sports as of 2012. [xix] This is the fifth consecutive year in which these numbers have remained stable at 60% or more[xx]. This goes to show that the fitness trend is not going away soon in America and the fitness industry is only going to grow stronger each year. All in all, fitness is a profitable industry in the US and the numbers will only continue to rise.

Question: How do you prepare your fitness business for this projected influx?

[i] Club Solutions, Fitness Industry Jobs Expected to See Substantial Growth, on the Internet at http://clubsolutionsmagazine.com/2013/02/fitness-industry-jobs-expected-to-see-substantial-growth/ (visited May 18, 2013).

[vi] IHRSA, About the Industry, Health Club Industry Overview, on the Internet http://www.ihrsa.org/about-the-industry/ (visited May 18, 2013).

[xi] The New York Times, Business Day, A Jobs Boom Build on Sweat in an Age of Belt-Tightening, on the Internet at: http://www.nytimes.com/2012/07/01/business/for-personal-trainers-a-boom-fueled-by-a-belt-tightening-age.html?pagewanted=all&_r=0 (visited May 18, 2013).

This is just great news for everyone in Fitness Industry. Great statistics you have mentioned here. I am also part of this industry, i do own a fitness studio in California and agree with above escalation mentioned. My very own fitness circle has increased a lot since last year. Every person i meet want to do little bit exercise at least to stay fit. Keep on Posting great information, it motivates everyone in fitness industry!!
Thanks.

Thank you Marco for your support and encouraging words. We truly are part of a great industry.

Thanks for the great info with references Lawrence. Am writing a business plan to expand my current personal training studio and found your blog very helpful!

Great to hear, Wendy! Please let me know if there are any other topics or issues that you face that you would like to see written about on this blog.

Wishing you the best in your business planning,
Lawrence

Start FREE Training Call Shows You How To Get High Paying Personal Training Clients That Are Eager To Hire YOU! Begin using these techniques IMMEDIATELY to start booking new clients in your area.

Indeed its a great post .Yes the fitness industry is growing a fast pace and therefore numerous fitness centers as well as stores selling fitness equipments has come into existence and will continue to be.Now these stores, apart from gym equipments they are also selling home exercise equipments suitable for all people.

Pingback: From a Business Standpoint: Is Fitness Health really Wealth?
Pingback: How to Join a Fitness Center Without Being Scammed

This is indeed a big industry. In the last 40 years there has not been any changes or modifications to accessories, more specifically to the handles of the accessories and machines. I have an invention and which I created a commercial prototype and for which I have a patent. I would like to sell my invention. Does anyone have any contacts with the bigger companies like Precor, Golds Gym, Life Fitness and Cybex. Thank you. My email address is [email protected]

I greatly appreciate you for this insightful write up. Am a Fitness Coach, i run a fitness programme titled TimwOut With Ben in my country Nigeria, i started this deal at first not believing it will end up being the way it is now, i must tell you in almost every breaking day someone wants to workout with Ben it has really become an opportunity to earning source…. There’s indeed a real business in being a fitness trainer… kudos to you bro.

Does anybody know the average profitability of gyms before tax and debt payments (IBITDA)?

Thanks for this… I’m reading this from Kenya. I’ve just gotten into the industry and I think some of these stats could work for me.

If you wish for to improve your familiarity
just keep visiting this site and be updated with the hottest news posted here.

Thanks for the feedback!

I read this article fully regarding the comparison of most recent and previous technologies,
it’s awesome article.

Thank you for the positive feedback! Happy to know you enjoyed the article.

I adored this article. I visit your posts quite often and
you are often writing some great content. I shared this on Social Media and
my audience loved it.

I adored this blog. I visit your posts really frequently and you are always
coming out with some great articles. I shared this on Twitter and my fans liked it.

Thanks, I have recently been looking for info approximately this subject for ages and yours is the best I have found so far.
However, what about the conclusion? Are you sure about the supply?

Based on the reports that were referenced and the organizations which published them I believe that the numbers reported are accurate. Thank you for your comment and your question. Have a great day!

Thanks for another fantastic article.

Thank you for the comment I’m glad you found the article helpful.